Congress alleges Modi Government is favouring the Adani group for the submarine project.

The Indian National Congress party accused Prime Minister Narendra Modi’s government of “favouring” well-known industrialist Adani firm in the 45,000 crores 75-I Submarine project. According to the party, the government promotes its “crony capitalists.”

The Congress party said that the government encouraged “crony capitalists” by breaking norms and regulations.

During a press conference, Congress senior leader Randeep Surjewala and party spokesperson Jaiveer Shergill accused the federal government of breaking the Defence Procurement Procedure (DPP) of 2016, as well as overruling the suggestion of the project’s ‘Empowered Committee’ of the Indian Navy.

Congress claimed that the DPP set two key parameters: the shortlisted company to manufacture the six submarines in the deal must have a Credit ‘A’ rating, and the Ministry of Defence must approve the ‘Special Purpose Vehicle’ (SPV) set up for the project before applying for a “request for expression of interest.”

According to Congress, the Empowered Committee of the Navy shortlisted the public sector unit, Mazagon Docks Shipbuilders Limited, and the private sector firm Larsen and Toubro.

However, Congress said that the government is planning to defy the Committee’s recommendations by letting the private business, which lacks both submarine manufacturing experience and the requisite credit rating.

“Does the central government prefer Adani Defence JV for the 45,000 crore Submarine project?” Is the government advancing the financial interests of its crony capitalist buddies by breaking the DPP 2016 and its eligibility conditions? Is this government overruling the Indian Navy and its ‘Empowered Committee’ on the subject of Adani Defence JV’s ineligibility?

Surjewala alleged that even though a firm with a credit rating of ‘A’ should have been chosen for the project, the company which was given a credit rating classification of ‘BBB’ for a project valued 45 times greater. The defence ministry had not yet revealed why it made its choice.

The Congress has claimed that the Modi government ignored recommendations issued by an authorized committee appointed by the Indian Navy to favour Adani Defence in a 45,000 crore submarine deal.

The Congress party claims that Adani Defence JV, a defence business owned by PM Modi’s close friend Gautam Adani with no experience in submarine building, and Hindustan Shipyard Limited (HSL) have been allowed to participate in a 45,000 crore submarine project. 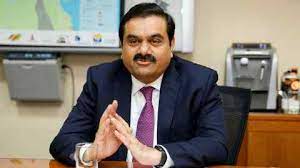 In a shocking discovery, Congress has accused the Modi government of bending the laws to favour Adani.

Adani’s application was rejected by an authorized committee of the Indian Navy led by the Navy’s Controller of Warship Production and Acquisition because his business was deemed ineligible. However, the Modi government authorized Adani Defence JV to participate in the project by overturning the judgment of the empowered committee.

Adani’s business wanted to construct submarines based on a clause that counts its experience in establishing and maintaining a power station, which is entirely contrary to the procedure.

Adani Group is an Indian multinational enterprise based in Ahmedabad. Gautam Adani created it in 1988 as a commodity trading corporation with the flagship company Adani Enterprises Limited (previously Adani Exports Limited).

Adani Ports has bought Dhamra Port, which was a 50:50 joint venture between Tata Steel and L&T Infrastructure Development Projects. The port opened in May 2011 and handled 14.3 million tonnes of cargo in 2013–14. The Group intends to boost its capacity to more than 200 Mt by acquiring Dhamra Port.

The Adani Group began as a commodity trading corporation in 1988 and has since expanded into the import and export of a wide range of commodities. The company was founded as a partnership firm with the leading company, Adani Enterprises, originally Adani Exports, with a capital of 5 lakhs.

In 1990, the Adani Group built its port in Mundra to serve as a basis for its trading operations. It began building in Mundra in 1995. It was India Inc.’s top net foreign exchange earner in 1998. In 1999, the company began trading coal, followed by the founding of Adani Wilmar, a joint venture in edible oil refining in 2000.

In 2016, Adani Aero Defence struck an agreement with Elbit-ISTAR and Alpha Design Technologies to collaborate on Unmanned Aircraft Systems (UAS) in India. Adani Enterprises received authorization from the Gujarat government in April to commence construction on a solar power equipment facility.

Adani Green Energy (Tamil Nadu), the Adani Group’s renewable branch, began operations in September in Kamuthi, Ramanathapuram, Tamil Nadu, with a capacity of 648 MW at an estimated cost of 4,550 crores (equal to 56 billion or US$730 million in 2020). The Adani Group also opened a 648 MW single-location solar power facility in the same month.

The second phase of the group’s development began with the development of substantial infrastructural assets.

Let the Prime Minister and Defence Minister say that ‘fairness, not foul play,’ ‘nationalism, not crony capitalism,’ will be the yardsticks for the decision on India’s historic submarine project.”