After being a close second for months, Adani Group chairman Gautam Adani has now surpassed the fortune of Reliance Industries Ltd.’s Mukesh Ambani to become the wealthiest person in India and Asia.

However, according to the Forbes Real-Time Billionaire Index, Ambani remains Asia’s richest person, with $90.3 billion to Adani’s $89.3 billion. On Tuesday, the majority of Adani stock closed in the red, while RIL gained 1.64 per cent. On the same day, a new Adani company (Adani Wilmar) was listed on the Indian stock exchanges, the impact of which on Gautam Adani’s fortune will be known shortly.

Many in the business world expected Gautam Adani’s fortune to surpass Anil Ambani’s last year. A June 2021 report, however, stated that the National Securities Depository Limited (NSDL) had frozen the accounts of foreign investment firms with stakes worth Rs 43,500 crore in Adani’s four listed companies, which had a significant impact on Adani’s stocks and Gautam Adani’s fortune (the business tycoon had lost over $12 billion).

The coal magnate, whose controversial Australian mine project drew criticism from climate activists, including Greta Thunberg, has increasingly looked for ways to expand beyond fossil fuels. He’s expanding into renewable energy, airports, data centres, and defence contracting, all of which are priorities for Indian Prime Minister Narendra Modi in terms of nation-building and meeting the country’s long-term economic goals.

At the same time, “The Adani Group has spotted and entered all the happening sectors at the right time,” said Deepak Jasani, head of retail research at Mumbai-based brokerage HDFC Securities Ltd. “The industries are capital-intensive, and the company has had little trouble raising funds to expand.”

Some of Adani Group’s listed stocks have risen more than 600 per cent in the last two years on bets that Modi’s push into green energy and infrastructure will pay off as he seeks to revitalise India’s $2.9 trillion economy and achieve the country’s carbon net-zero target by 2070. MSCI Inc.’s decision to include more Adani companies in its Indian benchmark index requires any fund tracking the index to purchase the shares.

Both Indian billionaires, who built their fortunes on fossil fuels or coal, are now pursuing green energy projects. Ambani has pledged $10 billion over the next three years as part of a $76 billion renewable energy investment plan. Adani has pledged to invest a total of $70 billion by 2030 to help his company become the world’s largest producer of renewable energy.

In 2021, firms such as Total SE and Warburg Pincus LLC had invested in Adani’s companies. The French oil giant agreed to buy 20% of Adani Green Energy Ltd. and a 50% stake in the Indian partner’s portfolio of operating solar assets in January 2021, but at a steep discount. The transaction was worth only $2.5 billion, compared to Adani Green’s market cap of $20 billion at the time.

Warburg said in March 2021 that it would invest $110 million in exchange for approximately half of Adani Ports and Special Economic Zone Ltd.

With a net worth of $88.5 billion, Billionaire Gautam Adani is the wealthiest person in Asia and is now the world’s 10th richest person.

Despite the lack of analyst coverage, MSCI has decided to include some Adani stocks in its India index. In May, three of the tycoon’s listed companies were added, bringing the group’s total footprint to five. According to HDFC’s Jasani, the addition has resulted in more mandated buying by investors who follow the index.

The businessman has been through several crises. He was kidnapped and held for ransom more than two decades ago. He was a hostage at Mumbai’s Taj Mahal Palace hotel during the terror attacks that killed at least 166 people in 2008.

Climate campaigners have criticised Adani’s sustainability claims and green ambitions, pointing to the group’s Carmichael coal mining project in Australia, which will increase supplies of the highly polluting fossil fuel. After having difficulty obtaining external funding, the Adani Group decided to use its own funds. It announced in December that it was ready to begin the first coal exports from the Australian mine.

For example, ports are “almost monopolies” for the Adani Group, according to Sanjiv Bhasin, director at local brokerage IIFL Securities Ltd. Because many Adani companies are closely linked to India’s industrialization and infrastructure push, they are “in a sweet spot and have capitalised on it,” according to Bhasin.

Adani Group has spotted and is entering all the happening sectors at the right time, “said Deepak Jasani, head of retail research at investment firm HDFC Securities Limited.

The completion of Adani Green Energy’s 100% acquisition of Soft Bank’s SB Energy for $3.5 billion (approximately Rs 26,000 crore) for a total capacity of 5 gigatonnes in October gave India’s clean energy sector a massive boost. The above transaction was considered as one of the largest in the country’s renewable sector. 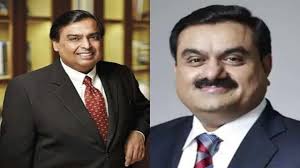 Mr. Adani, a first-generation entrepreneur who began his career as a diamond trader in Mumbai in the 1980s, later helped run his brother’s plastics business in his home state of Gujarat before founding Adani Enterprises, the group’s flagship company, as an agri-commodities trader in 1988.

Over the last two decades, the group has expanded into ports, power generation and distribution, airports, data centres, and digital services. According to the Bloomberg Billionaires Index, Mr. Adani’s net worth increased by $52 billion last year.

Last year, Total and Warburg Pincus were among the firms that invested in Mr. Adani’s businesses. In January 2021, the French oil giant agreed to purchase 20% of Adani Green Energy as well as a 50% stake in a portfolio of operating solar assets. 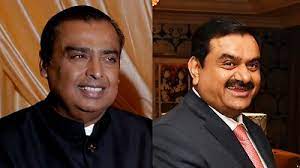 Warburg announced in March 2021 that it would invest $110 million in exchange for approximately half of Adani Ports and Special Economic Zone.

Last year, three Adani Group companies were added to the MSCI India Index. Adani Enterprises, a gas supplier, and Adani Transmission, a power distributor, are among them.